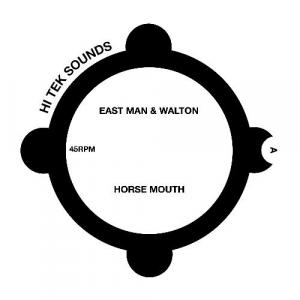 Hi Tek Sounds is the new label from East Man (AKA Basic Rhythm) set up after his debut album for Planet Mu 'Red, White & Zero'. The second release on Hi Tek Sounds is a collaborative effort from East Man & Walton. The A side, Horse Mouth, is a dread affair. Bursting into life with a staccato drum pattern and an ominous synth drone that slowly builds up before breaking down into a calm before the storm that utilises the now infamous vocal sample of Leroy 'Horsemouth' Wallace, before dropping back in with militant staccato drums and a deep booming sub stab. This one guarantees damage on the dance floor! The B side, Gunshot, starts with soft, summery chimes and a minimal kick drum and clap pattern, peppered with vocal samples taken from an old recording of a pirate radio show, before dropping into a spacious but heavyweight drum pattern and deep rolling sub bass. Definitely one for the heads!