Teachings / Going Around In Circles 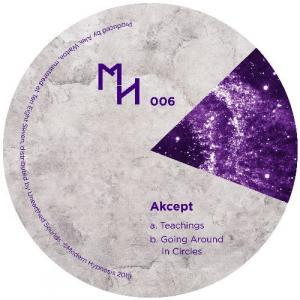 Modern Hypnosis welcomes New Zealand's 'Akcept' to the label. The Christchurch based producer has gone from strength to strength, his unique take on dubstep has had him labelled as one of the rising stars in the genre. Akcept continues to defy genre boundaries and push his sound, drawing inspiration from a wide range of musical influences such as, Hip-Hop, African rhythms and deep dub styles. After a string of releases at 140 bpm on some of the world's leading dubstep labels (Amar, Artikal, Moonshine Recordings, Sentry), Akcept pushes the boundaries further still with two hypnotic rollers demonstrating his love for minimal dub techno and ambient styles. A sort after dub, 'Teachings' is now getting the full heavyweight 12" treatment, a mesmerising dub odyssey, distant stabs create an emotive atmosphere as his signature heavy bass notes roll in, followed by a 'steppas like' riddim to lock you in the groove. Subtle dubbing, dynamic use of space, and the introduction of an alternate skank will have you in deep meditation before the drums come back in with more energy and an astute bass line. On the flip 'Going Around In Circles'. A thumping kick drum and groovy baseline accompanied by a classic 4/4 beat and a poignant vocal sample, blur the lines between house, techno and dub music. 'True Rights, True Love, True Justice'