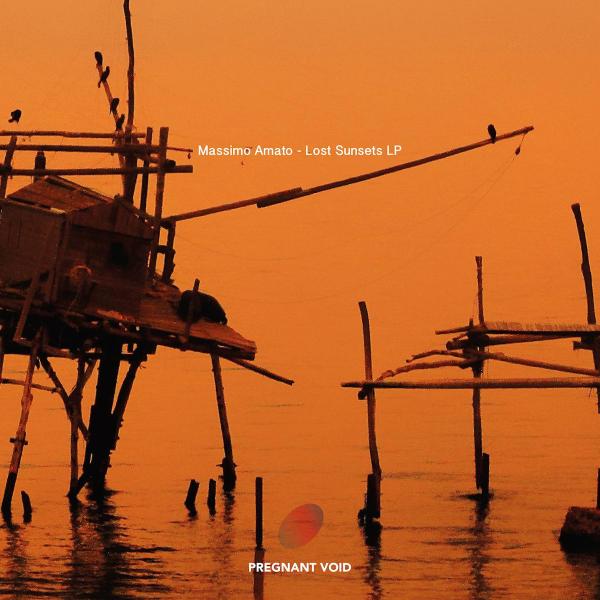 The ever forward-thinking and experimental Pregnant Void label welcomes electroacoustic sound sculptor Massimo Amato for a spellbinding new album, Lost Sunsets, due in 2019. Amato hails from Rome and has put out a fantastically innovative and cultural selection of albums that fuse ethnic, spiritual funk and jazz musics made with analogue and acoustic gear. Label head Simone Gatto first met Amato in Lecce in 2017 when he was invited to play by a local electronic music festival. He performed his last album In The Mood and Gatto was so impressed so invited him to work on his label. This, his third album, was composed between 2007 and 2010 and features collaborations with a series of excellent musicians including Gigi Masin. Tracks feature a mix of synthesizers, harmonium, harmonica, toys and percussions that convey a range of exotic moods and grooves throughout. An enchanting tone is set from the off, with the heavenly chords and innocent vocal whispers of "Time Capsule" then the rhythmic synth sequences of "To Love The Love". Drifting trumpets bring real melancholy to the electronic glitches of "Dreaming of You", while "Lightwaves" is a transcendental meditation on long sustained chords that empties your mind. "Lost Sunsets" features exquisite piano notes and glassy tinkles, "Nightflower" is a deeply insular and inward late night ambient track before "Folksong" is an uplifting piece with gentle distant drums and more magical synth work. There is a Middle Eastern feel to the rippling chords of "Blue Petals" and "I Found Love" and the outro is another subtly uplifting piece that is stunning in its celestial synth work. This is a serene and patient album of richly detailed sound that manages to be stunningly light and deft yet make a huge emotional impact throughout. "Thanks Simone Gatto and Pregnant Void for being close to me and all the great musicians and friends who helped me. A special thanks to Luca Barlocci and his third eye/camera for capturing the emotion of sound." Massimo Amato - synthesizers, harmonium, harmonica, toys and percussions. Imi Gavin - vocals on A1 and D2 Massimo Berizzi - trumpet on A3 Gigi Masin - synth on C1 Mario Fob - reverse guitar on D2