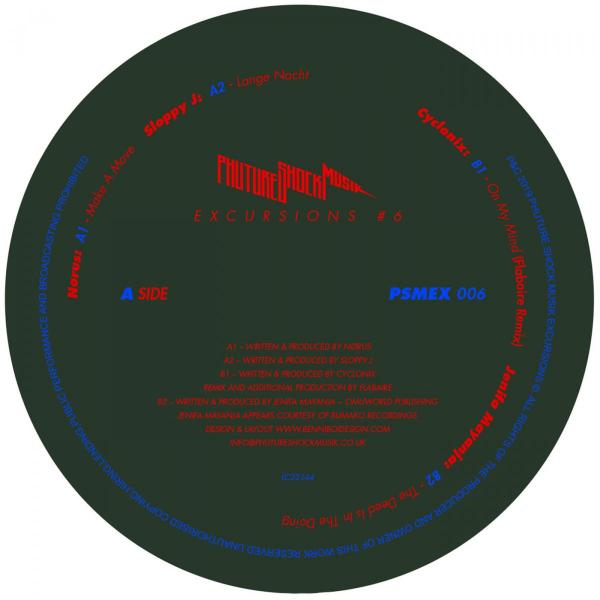 On the sixth document of their vinyl-only V/A series EXCURSIONS , Josiah Hartley s Phuture Shock label continues its quest to seek and showcase both new and established talent from the adventurous depths of the dance music underground and beyond. Assembling four tracks by a quartet of artists spanning the globe from Brazil to Germany, UK via France and the USA, this versatile collection of dancefloor-orientated cuts largely focuses on the many diverse shades of contemporary deep house. Leading the charge is Brazilian DJ/producer N rus, one of S o Paulo s most promising new house music exports on the verge of breaking through, who makes his debut outing on wax with the heavily supported Make A Move . This dancefloor weapon has been heating up the underground as a digital dubplate particularly within the international lo-fi house scene - for the best part of 18 months, and here finally finds a home for an official physical release. Another fresh face, or rather lesser known talent named Sloppy J is also welcomed into the fold. With one sole release ( My Jams EP) under his belt to date, the low-key Berlin-based Canadian, who also moonlights under the alias Jonattan Levingstone, offers up his first new output since said EP, released on Montreal imprint Parages Music back in 2016. Making a welcome return, albeit in a remixed presence is Nottingham producer Cyclonix, with a track that first appeared in its original form on EXCURSIONS # 3 . But here gets given a new lease of life from Parisian DJ/producer and D.Ko records co-owner Flabaire, who alongside his label mates, has proved to be a leading light of the revived French house scene in the past few years. Completing the dynamic cast is Ugandan-born, Connecticut/Berlin-based veteran DJ and producer Jenifa Mayanja. Widely known in deep house circles for her efforts on the likes of Underground Quality, Deep ArtSounds, and the three labels she co-helms - Bumako recordings, Sound Warrior and EDJ Records - here she contributes something that taps into her more leftfield impulses. Freshly mastered for max sonic appreciation, Make A Move by N rus sets off the proceedings on the A-Side; where scuttling hi-hats and UK-style pounding, juggernaut kicks are paired with gnarly bass tones, a sampled vocal loop that drifts in and out of the mix, and a dusty milieu of woozy pads that altogether manages to evoke the hazy nostalgia of early 90 s house and techno raves. Next up the reins are handed over to Sloppy J with the hypnotic, Chicago-influenced workout Lange Nacht , which is centred around a filtered piano groove that swings forth with jazzy flair over a cacophony of jittery cymbals, fierce offbeat claps and sporadic bursts of bleeps and blips from an unknown planet many light years away. For his remix of Cyclonix s On My Mind on the flipside opener, Flabaire cranks up the BPM with the addition of rolling four to the floor beats and a slinky bassline; leaving just small traces of the original s vocal sample, whilst sprinkling a melange of techy synth hooks and warm emotive pads as the track evolves into something entirely new and deep into peak-time territory. Before Jenifa Mayanja completely flips the script with the esoteric deepness of EP finale The Deed Is In The Doing , an abstract house jam for the mind, body and soul of the Room 2 dwellers, where sweeping sci-fi chords and MK-esque MIDI sax licks envelope themselves around a steady 4/4 rhythm track replete with intricate percussion, and a groovy analogue bassline that writhes its way around the track with serpentine splendour.