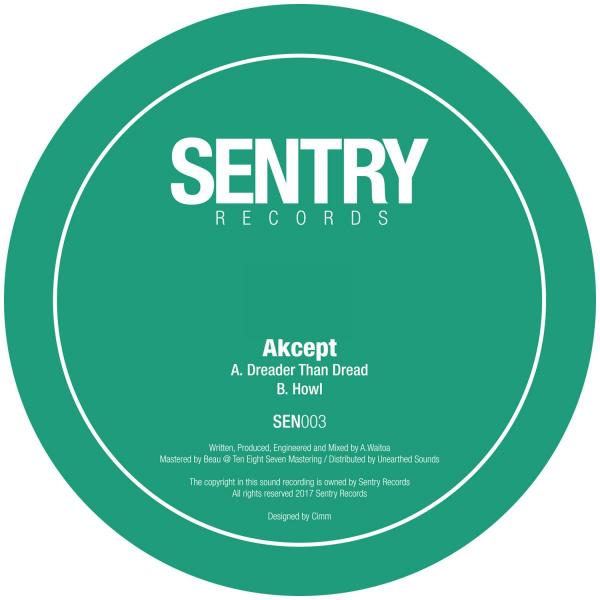 Without a doubt one of the more influential imprints around, Youngsta s Sentry Records is successfully keeping its eyes and ears for sound system music wide open. Established only a year ago, the imprint is already more than ready to serve its next immaculate bass music evocation, conjured on a colossal 12-inch. Following up on dBridge and Nomine s respective heavyweights, the first-class roster welcomes one of New Zealand s thriving artists to their ranks. Part of the Eyes Down Sound, Akcept has been shelling the world with his foundation sound through venerated imprints, such as AMAR, Moonshine Recordings or FKOF and of course commendable support from veterans and bass music collectives around the world. True to the core principles of sound system music, transporting the beloved old school feel into the very present of the 21st century - Dreader Than Dread envelops eerie spheres of ghastly dub sirens and warbled tape echoes, as the vocal chant jolts the arrangement into unwieldy sub emissions. Finally getting to be able to breathe again, promptly being thrown back into a percussive double-time sub ostinato of monstrous proportions. Gaining momentum in the process, the soundscape is smoothly complemented by a vintage & anthemic brass skank, leaving nothing to be desired - fiery through and through. Having been sought after since its first appearance, Howl is an earthquake-class Dubstep eruption - massive is inscribed in its sonic nature. A badman chuckle reverberates within garbled tape noise, introducing the otherworldly impact of Akcept s snares once more. Fiercely stepping forward, distorted bass oscillations pave the way. If it weren t enough madness, the sheer amount of weight continues to intensify and escalate, as the track progresses - sure-fire rewind material. A true low frequency onslaught in every way - joining the creme de la creme of 2017 s illustrous musical output in soundsystem music.