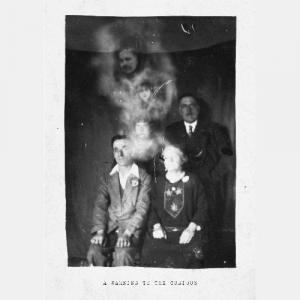 Under the UVB-76 Music umbrella emerges The Stone Tapes, a new medium for residual recordings documented in static matter. Built on the intellectual foundations 19th century paranormal theory the label purports a belief that within sound can be located an audio apparition, an intent and carried feeling. In essence transmuting a specific moment into vinyl observable only at playback. An ideological limestone soaking up and releasing intent. Imprinting on the psychic ether a distinctly deadened ambience, The Stone Tapes elicits ideas that even today lurk on the fringes of experience, considered heretical by some, while held foundation by the initiated. The Stone Tapes reanimates for a second release that reasserts the labels grounding in astute conceptualizations in realized sound. A collaboration between Moroccan born Amsterdam resident and Leyla Records chief Chafik Chennouf and 10 Label boss and Kyoto, Japan native Katsunori Sawa. A rhythmically pulsating quadrivium, the Fragments of Reference EP distils four disturbed takes on deeply unnatural sound in a 4/4 framework. Cavorting around themes of self-actualization, denial, inevitability and fate, the EP goes to great lengths to reflect our modern predicament. Techno clairvoyance.