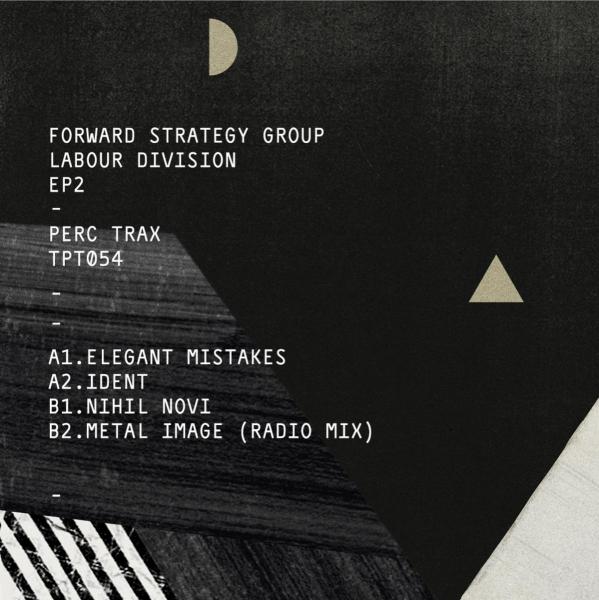 Perc Trax is proud to unveil the 2nd 12" to be taken from Forward Strategy Group's debut album 'Labour Division' rounding up some of the most popular tracks from the album giving them the vinyl release they truly deserve as well as adding remixes from Perc Trax's man in Athens; Sawf and Factory Floor's master of electronics Dom Butler. First up on this promo is Sawf's remix of Mandate, where the original mix's stepping, electro-tinged rhythms are swapped for a broken, industrial stomp displaying a progression from Sawf's own Flaws album on Perc Trax and offering a tantalising glimpse of his forthcoming Perc Trax material. Rounding off the remixes is Dom Butler's savage take on Nihil Novi. Already remix by Dom's Factory Floor colleagues Nik Colk Void and Gabe Gurnsey, Dom floats elements of the original mix over a 16th note cowbell rhythm that has been cutting through sound systems across the world as one of Perc's secret weapons over the last new months. Opening up the tracks on the vinyl is the most popular club track from the album; 'Elegant Mistakes' where raw industrial sounds meet with broken beats that hint back at classic UK hardcore. Completing the a-side is album opener 'Ident', one of the LP's most melodic moments and proof, if it was ever needed of Patrick and Al's wide ranging influences and production skills. The B-side launches with 'Nihil Novi', an album favourite that appeared on the first Labour Division 12" as remixed by Factory Floor. Now the original mix appears on vinyl and it's echoing, slow-morphing stabs sound as cutting as ever. A DJ favourite since it was initially promo'd, it now sounds even better on vinyl. Closing the EP is a 'Metal Image', where a world of atmospherics opens up on top of a slow droning kick drum. A perfect set-opener or mid-set DJ tool it is demonstrates the variety that is on show across 'Labour Division' and is one of many reasons for the albums excellent reception.