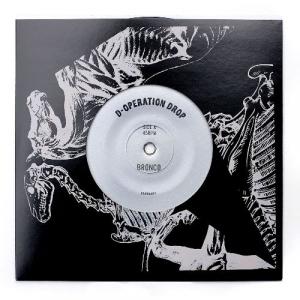 ZamZam 71 is the welcome return of D-Operation Drop, the multi-man crew from Cesena, Italy with a well-earned rep that continues to grow. Everything they touch becomes a bona fide killer, from traditional steppers to 140 abstractions, to full on clash material. Last year alone saw powerful releases on Scrub A Dub, Lion Charge, Green King Cuts, and Subaltern. Their second chapter on ZamZam marks yet another high point, an absolutely storming release that won't leave any box it makes it into. The reverb drenched melody that opens ''Bronco'' throws open the gate for a brutalist kick-snare riddim with one single purpose - to absolutely crush the dance. A throbbing two note sub and swinging chains sweep aside any and all challengers, leaving pure devastation in their wake. Mesmerizing in its simplicity and absolutely devasting in its efficiency, this weapon has been deployed on dubplate from the likes of J:Kenzo & The Bug - now the beast is released to wreak havoc on Sounds far & wide. 'Coldset' is the healing salve after the bruising of the A side, equally captivating and functional in the dance, swaggering at a cooler temperature with metallic rockers hi hats in the drivers' seat and ethereal pads hovering above another signature D-Op Drop 140 scorcher. Reminding us of the roots of this music, 'Dubwise' is the refrain that echoes and trail-tangles deep down the side chain into lusciously distorted sheets of sound that will have hands in the air for multiple rewinds.