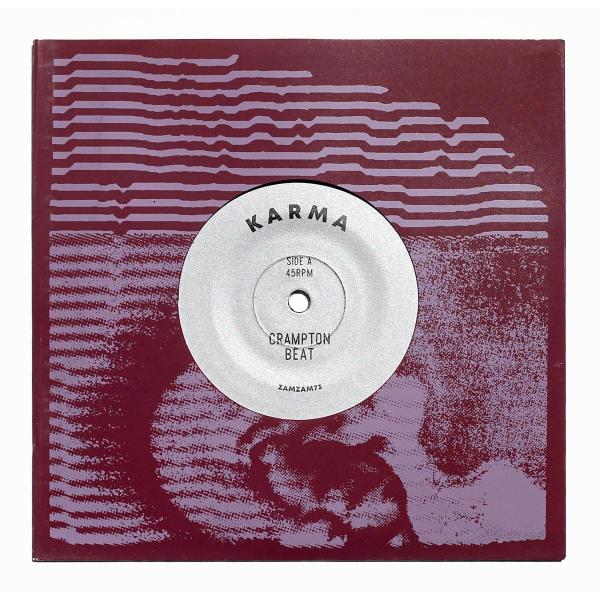 In six short years, over as many releases, Corin Bornhoff AKA Karma has carefully built a name as one of the most trusted and sought after producers in dubwise dubstep. His releases are few and far between, with most tunes gaining legendary status on acetate long before they see release. To date only System and Innamind have released his works on vinyl - ZamZam 73, our first release together, continues Karma s path of strict quality control with two eagerly-awaited sound system tunes. Heads have been clamoring for A Side Crampton Beat to be released for no less than five years. In that time it has aged beautifully, showing itself to be a truly timeless track, as captivating now as it was when first played out. Buoyed by a massive, melodic bassline and pounding kick, thick atmospheres ebb and flow like tidal movements, and hard-skanking stabs drive the track forward. Deeply melancholic pads that could almost be processed horns create a sense of loss, while lasers, test tones, and lacerating snares resolve in sheets of echo and feedback. A gorgeous study in contrasts, Crampton Beat is a rare steppers that is both rhythmically ruthless and rich in emotion. Awash in tape hiss as thick as a sneaker wave, the B Side is an equally deep tune in collaboration with Karma s longtime friend & musical sparring partner G.Goodz. Blanketed in fog, rocking with shaker & sly drum turnarounds, "Shortwave Step has all the hallmarks of the most beloved Karma tracks - propulsive half-time riddim, lonely reverb-soaked spaces, masterful EQ, mournful melodics, and subtle dub effects. Together these two sides show once again that Karma is an artist who fully integrates emotion, intuition, and serious craft to maximum effect. On the visual side of this release, TRUSIK has brought onboard Japanese artist Hisanori Yagi whose surreal, yet familiar artwork evokes and compliments the mystical sonic world that CITY1 has created for our seventh record.