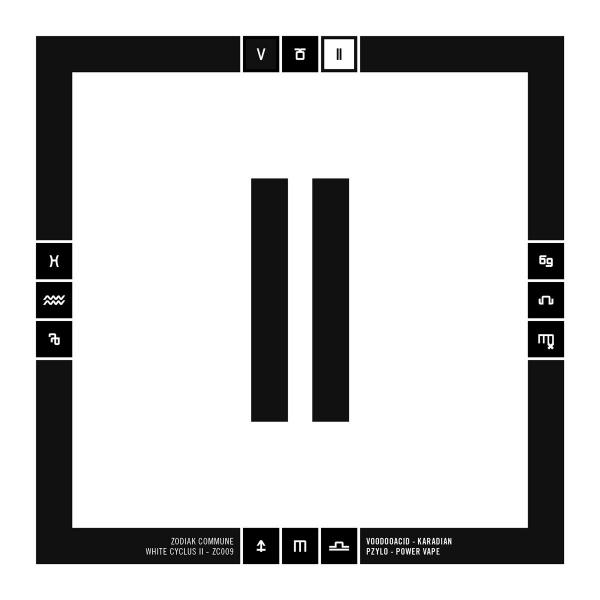 The Dutch Zodiak Commune Records proudly presents the White Cyclus collection. White Cyclus is a collection of six releases with Underground Acid and Dark Techno tracks from different producers. White Cyclus I is released in 2012. After 5 years of silence we are releasing White Cyclus II in Juni 2017. And White Cyclus III will released in Oktober 2017! The silence is broken White Cyclus II EP contains these 4 fantastic producers: Pzylo (FR) - Power Vape This man needs no introduction. Owner of the Acid Cirkus label and responsible for many track on many labels. His stunning distorted acid will blow your ears off with the track Power Vape. Expect pumping kicks, scissoring hi-hats and hard 303 sounds. VoodooAcid (NL) - Karadian A young collab of 2 guys with lots of love for music. After a year of livesets and making live music in a bus at several random places around the Netherlands, they went into the studio. Get ready for some fresh Acid! 1NC1N (NL) - Dexteram This new talent came recently to our ears. Always looking for new sounds using several synths and drums. This dark industrial techno track isn t that easy to get out of your mind. Expect a deep bassline, nice percussion and effects! SB-Six (NL) - Batteries For Lunch He made several tracks like deephouse, ambient, garage, triphop and drum n bass! This guy can produce everything he wants. Now it s time for ACID! This tracks has a nice 303 loop with a very catchy synth underneath. Lovely oldskool sound on this one!